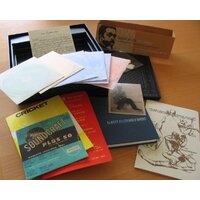 By 1958, Albert Ayler and his horn had made some rounds: from boy prodigy to teenage member of Little Walter’s Blues Band, from “Little Bird” of Cleveland to featured US Army Band soloist. Then he resolutely set out to forget everything he’d ever learned about how to properly play the sax so that he could really PLAY it — unhinged, free from strictures of pitch and form, drawing on spirituals, folksong, marches, and other big whopping chunks of collective musical memory — to channel symphonies to God out his horn. Seeking nothing short of Truth in music, Albert Ayler became THE catalytic force in defining the sound of the tenor in Free Jazz, and was a heavy influence on John Coltrane’s later work.

Holy Ghost is the first comprehensive attempt to build a monument in sound to Albert Ayler. The settings — radio and TV sessions, studio demos, private recordings, live concert footage — find his music at its most liberated. And with the sponsorship and assistance of Ayler’s family, friends, and colleagues, Holy Ghost documents his never-before-heard first and last recordings, bookending rare and unissued music from every stage of his career.