This is the one that started it: Mosaic, recorded in 1961, was the first recording of Art Blakey's Jazz Messengers as a sextet, a setting he kept from 1961-1964. The band's front line was trumpeter Freddie Hubbard, trombonist Curtis Fuller, and tenor saxophonist Wayne Shorter; Cedar Walton played piano and Jymie Merritt (a criminally underappreciated talent) was the bassist.

Everything on this set was written by the musicians in the band. Walton wrote the burning title track; its blazing tempo and Eastern modes were uncharacteristic of the Jazz Messengers sound, but it swings like mad. Hubbard contributed two pieces to the album, the first of which is the groover "Down Under," with its blues gospel feel. The bandmembers dig their teeth into this one, carrying the blues theme to the breaking point as Hubbard fills in between. But the horn charts are so sharp, so utterly devoid of excess, that they won't let the listener go.

Shorter's "Children of the Night" is a fine example of the tunes he would compose for the Miles Davis Quintet a bit later. While it's a hard bop swinger to be sure, his use of modality and counterpoint between the soloist and the front line is exemplary and his solo bites hard and fast as he tears up and down the registers of the horn. Fuller's "Arabia" is a basic blues groover, and the playing is inspired throughout.

The disc closes with Hubbard's "Crisis," which opens with Merritt and Blakey ushering in the rest of the band. Walton first plays a repetitive minor-key riff. When the horns enter, Walton keeps the theme, Merritt moves over a bit to dig in between the lines, and Blakey keeps it all anchored because in this tune rhythm is everything. Hubbard was in many ways a soul-jazz composer before there was such a thing, and the motifs in this tune prove it -- as does his beautiful blowing in his solo.

This is a fine recording and should be owned by any Blakey fan. The Rudy Van Gelder reissue came out in 2006 and features no bonus material. The sound, as on all the Van Gelder reissues, is painstakingly wonderful. 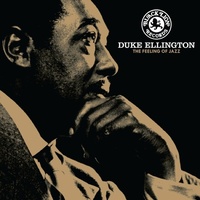