Mastered from the Original Analog Master Tapes for Intimate Sonics.

Joel's Breakthrough 1973 Album is Filled with Memorable Character Sketches - Joel's Pathos Impacts the 'Everyman' in All of Us. Billy Joel's Piano Man established a legend via two elements that became a trademark of his career: simple, yet disarmingly effective lyrics that speak to universal truths and instilled feelings of pathos.

With the classic title track, Joel captures the emotions and expectations all of US consciously or not attach to our favorite musicians: Sing US a song you're the piano man/Sing US a song tonight/Well we're all in the mood for a melody/And you've got US feeling alright, he croons. Indeed, Joel has everyone feeling good on this breakout set. Mobile Fidelity secured the original master tapes to present this 1973 singer-songwriter masterwork in unparalleled fidelity. The cavity of Joel's piano, tension of the strings, and reach of his voice are astounding on this numbered limited-edition hybrid SACD. The New York native finally seems as if he's playing in your room rather than down the hall. 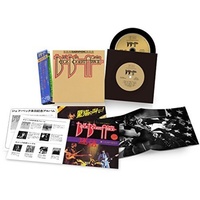