The Hammond organ mastery of Jimmy Smith is arguably nowhere as profound as on 1959's Home Cookin'. Support is provided by the formidable trio of drummer Donald Bailey, guitarist Kenny Burrell, and tenor Percy France. Here they couple a few understated cool R&B classics with their own originals. The almost dirge-like cadence of "See See Rider" is given a bluesy and low-key workout, featuring tasty interaction between Smith and Burrell. The languid pace churns steadily as they trade off impressive solos with almost palpable empathy. Burrell's "Sugar Hill" swings with a refined post-bop attack. His call-and-response with Smith conjures the pair's trademark give and take, which is assuredly one of the reasons the two maintained a five-plus-decade association.

Ray Charles' "I Got a Woman" is nothing short of definitive as the upbeat rhythm immediately propels Smith and Burrell into an otherwise unassuming and practically infectious bounce. Also duly noted is the sturdy backing of Bailey, whose discerning and compact snare is impeccably suited to the arrangement. (Sadly, the track fades just as the band begin to really get loose.) "Messin' Around" and "Gracie" bring France on board, adding a subtle reedy texture to Smith's intricate and advanced melodies. "Come on Baby" is another Burrell composition that slinks with a soulful mid-tempo groove, allowing for some inspired soloing. The title perfectly captures the travelogue nature, proving that getting there is indeed half the fun. Jimmy Smith's voluminous catalog is remarkably solid throughout and Home Cookin' is a recommended starting place for burgeoning enthusiasts as well as a substantial entry for the initiated. 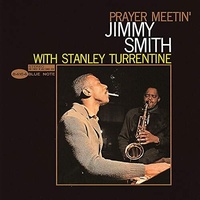 Amy Baker - It's a Good Day