This is NOT a hybrid SACD. Reissue features the high-fidelity SHM-SACD format - fully compatible with standard all SACD players, but it does not play on standard CD players

After the harrowing Plastic Ono Band, John Lennon returned to calmer, more conventional territory with Imagine. While the album had a softer surface, it was only marginally less confessional than its predecessor. Underneath the sweet strings of "Jealous Guy" lies a broken and scared man, the jaunty "Crippled Inside" is a mocking assault at an acquaintance, and "Imagine" is a paean for peace in a world with no gods, possessions, or classes, where everyone is equal.

And Lennon doesn't shy away from the hard rockers -- "How Do You Sleep" is a scathing attack on Paul McCartney, "I Don't Want to Be a Soldier" is a hypnotic antiwar song, and "Give Me Some Truth" is bitter hard rock. If Imagine doesn't have the thematic sweep of Plastic Ono Band, it is nevertheless a remarkable collection of songs that Lennon would never be able to better again. John Lee Hooker - It Serve You Right To Suffer - H 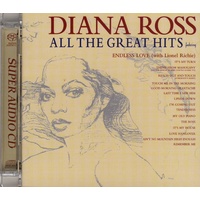 The Rolling Stones - It's Only Rock 'n Roll - SHM