The first solo guitar album from Julian Lage. WORLD'S FAIR is so spontaneous and intimate in feel it's as if this prodigious guitarist had just arrived in your living room, picked up his vintage Martin, and simply started to play. It's very much a project created in the moment, a dozen acoustic guitar tracks recorded over the course of a mere two days, at Sear Sound in New York City. In concept, however, WORLD'S FAIR was more than a year in the making, as Lage gradually came to embrace the rich musical and emotive possibilities within the austere format of one musician and one acoustic guitar.

The album title is a clue to Lage's intentions, the phrase conjuring up a bygone hopeful vision of the future, a 'tragic optimism,' in Lage's words, since the future never quite turned out as the presenters at those grand expositions had predicted. The understated beauty of these tracks is laced with a certain melancholy. World's Fair seems suspended in time, using the past as a reference yet seeming somehow daring and contemporary in it's unadorned arrangements and unabashed melodicism. The mood is often contemplative but, at times, on tracks like 'Peru' and 'Red Prairie Dawn' he kicks the tempo up a notch, with his fingers scampering quickly across the strings. 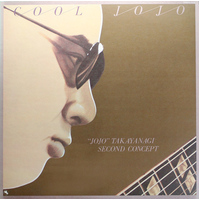