In 1958, after a string of critically acclaimed and successful albums, Miles Davis was searching for a new direction to take the music, and signs were pointing him off the chordal highway into a new jazz style: modal. His innovations would open up the world for improvisers. He recruited key players with the potential to solidify his new approach, forming his famed sextet with rising jazz giants John Coltrane, Cannonball Adderley, Bill Evans & Wynton Kelly, Paul Chambers and Jimmy Cobb. Miles hired the little-known Evans because he needed a pianist who was into the modal thing. Davis and Evans both had developed personal voices characterized by a melodic flow that suggested, rather than defined, musical structure.

This Collectors Edition marks the 50th anniversary with an unprecedented presentation of music, images, insight and history to celebrate the album that is essential to any music collection, the ideal gift item for any jazz lover, especially fans of Miles Davis a true collectors set.

Experience history in the making with never-before- released studio dialog offering listeners an initiation into behind-the- scenes action at the recording sessions Over 2 1/2 hours of audio including high fidelity studio and live material recorded by this allstar group of jazz giants. 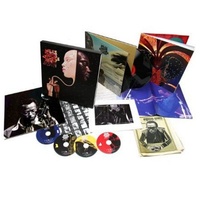