Nat "King" Cole - The Very Thought of You - Hybrid SACD

Absolutely incredible - it's as if Nat has been reincarnated and is singing in your lounge room.

This SACD version of The Very Thought Of You features the very first ever original mono versions of "Don't Blame Me" and "There Is No Greater Love." NEVER BEFORE RELEASED!

Space constraints in authoring this disc prevent these two bonus tracks from being included on the CD layer of this disc. But for the SACD layer, we've got the complete mono album along with the two never-before-released bonus tracks, for a total of 16 songs.

Playable in mono, stereo and multichannel.

Included with this deluxe reissue is a 3,400-word essay by Chris Hall on the album.

This has been a totally no-expenses-spared project. Using the original three-track work tapes from Capitol's vaults, mastering engineers Kevin Gray and Steve Hoffman along with DSD specialist Gus Skinas bring you an entirely incomparable SACD experience. In addition to the stereo mixes, this SACD includes a three-track transfer for multichannel playback and the original mono mix taken from separate microphone feeds, mixing consoles and tape machines at the original sessions. In order to master from the three-track masters, AcousTech had to be outfitted for three-channel playback. That meant Kevin Gray had to find a third identical monitoring channel chain (including mixing board, amplifier and speaker) as well as a three-track playback headstack and also a three-track preview head for the vinyl cutting system.  It was a massive assignment. We've spent a fortune to include these extra bells and whistles and to make this a truly historic reissue.

Nat "King" Cole and arranger Gordon Jenkins followed their hit album Love Is The Thing with The Very Thought Of You, foraging further into romantic and sensual bliss and creating the audio equivalent of a distillation of romantic ardor in a bottle. The sixteen ballads of The Very Thought Of You, each with their own euphoric tinge, include the title track "The Very Thought of You," "For All We Know," "Paradise," and "But Beautiful." Again orchestrated with the heavenly strings of the distinctive Gordon Jenkins, sympathetically backing the intimately expressive and supremely musical voice of the incomparable Nat "King" Cole, the result again stands among its era's finest, most stylistically defining recordings of popular music and continues to enchant listeners to this day.

The Very Thought of You was recorded in finely polished monaural and more minimalistic 3-channel stereophonic versions, each with dedicated microphones, console, mix and recorders. Each offers a different sonic perspective. The monaural recording was heard on the original hit records while the stereophonic recording offers the potential for a stunning wide-range realism. Using the original first generation full-track mono and 3-track session tapes from Capitol's vaults and custom headstacks, console and monitoring chain installed at AcousTech specially for these releases, mastering engineers Kevin Gray and Steve Hoffman along with DSD specialist Gus Skinas bring you an entirely incomparable SACD experience.

For this deluxe hybrid SACD, both mono and stereo versions are available in standard resolution on the CD layer and in high resolution on the DSD stereo layer, while the stereo versions are also available in high resolution 3-channel sound on the DSD multi-channel layer. Original releases contained 14 tracks, omitting two superb tracks recorded for the album, "Don't Blame Me" and "There Is No Greater Love," due to space constraints. Space constraints in authoring this disc again prevent these two bonus tracks from being included on the CD layer of this disc. However the SACD layer features all 16 tracks in mono and stereo - the very first ever release of the original mono versions of "Don't Blame Me" and "There Is No Greater Love"! In addition a 3,400-word essay by Chris Hall about the album is included. No expense was spared to make this the ultimate digital version of this album and a historic reissue. 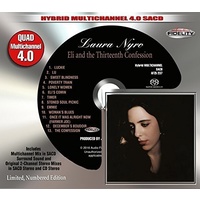