Recorded in 1972, Blue Moses, the most commercially successful album in pianist/composer Randy Weston's catalog remains one of his most controversial due to his conflicted feelings about the final product, which he feels is too polished and too far from his original intent for the project.

This group was backed by a punchy Don Sebesky-arranged horn section. Blue Moses, consists of four compositions; it was an attempt by Weston to showcase the influence "Ganawa" music from Morocco had on him as a composer. "Ganawa (Blues Moses)," with its frenetic, minor-key piano lines, knotty, Middle Eastern Eastern-sounding charts, and skittering North African rhythms push the listener into a new space, one that stands outside of CTI's usual frame in, and into, the exotic. The brass is aggressive, and while that might overshadow some recordings of lesser substance, Sebesky knew what he had in Weston's tunes, and reigned his players in just enough to keep the dynamics fresh, open, and full of engaged call-and- response playing between Weston, Hubbard, and Laws.

So too, album closer "Marrakesh Blues," with wordless backing vocals by Madame Meddah, twinned trumpet and flute lines, gorgeous electric piano solos, and a deep, strolling bassline. It's an Eastern modal blues with the sound of a horn section to boost its drama."Night in the Media" is a labyrinthine, more abstract piece, but utterly atmospheric and colorful in its arrangement, with exciting interplay between Weston's enormous chords and Washington's swinging, soulful saxophone and percussion instruments that create a lithe, spiritual jazz groove.

No matter how Weston ultimately feels about Blue Moses, this date succeeds on all levels. Creating a commercially viable recording from the elements presented must not have been easy, but Taylor rose to the occasion and delivered a grooving beauty of an album without compromising Weston's genius. 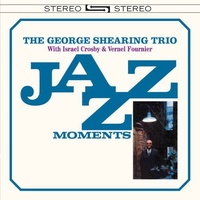