Recorded in 1972, Santana's landmark Caravanserai marks the legendary guitarist's foray into the jazzier, more adventurous territory that would define his career for the better part of the next two decades. Drawing from Miles Davis' pioneering period work, Santana ups the musical complexity, ditching vocals on most tracks and embracing moodiness as a form of expression. Despite its sharp move away from conventional structures, Caravanserai reached the Top 10 of the Billboard charts and attained lavish critical acclaim.

Re-mastered from the original analog master tapes, Caravanserai benefits from Mobile Fidelity's meticulous engineering, with the windows on the sparse production and the discernible live feel opening up on hybrid SACD with palpable transparency and exquisite detail. Brimming with atmospheric textures, three-dimensional spaciousness, and freshly uncovered microdynamics, this version follows on the heels of Mobile Fidelity's definitive, critically acclaimed editions of Santana, Abraxas, and Love Devotion Surrender.

The last Santana effort to feature guitarist Neil Schon and organist Greg Rollie, who would leave and form Journey,Caravanserai also welcomed the arrival of keyboardist/composer Tom Coster, whose impact is immediately felt. Displaying no hints of the discord that would cause the ensemble to splinter after the record's release, the band seamlessly melds with Santana's divine jaunts into instrumental nirvana. And while prior releases spread the wealth, Santana's role here is evidently clear from the start – this is where he's elevated from a pioneering star to a guitar god. His guitar effortlessly darts amidst a rich aural canvas, knitted with contributions from a sextet of percussionists as well as Schon's magisterial efforts.

With Santana, nothing is more important than soulfulness. And the profound spirituality and heartfelt expressiveness that pulse throughout the ten songs here are on par with the most personalized playing and music making he's ever done. The highly original Caravanserai distinguishes itself from most instrumentally based albums in that its purpose isn't to tout virtuosic jamming abilities but to take the listener places they've never been, and do so in a manner that's cohesive, focused, and inventive. Santana delves deeply into jazz's boundless possibilities without exploiting technique or structure, arriving at sonic intersections where jazz is the main landing spot for soul, Latin, and funk tangents. Whether it is the deep sound of a saxophone, polyrhythmic beat of a groove, or the intricate bend of Santana's guitar string, every nuance and note of Caravanserai is heard with supreme detail and clarity on this numbered edition hybrid SACD. We guarantee that you've never heard this record sound so lively, vivid, or monumental. 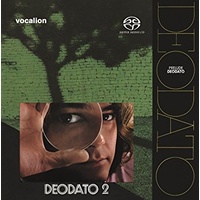