This Howlin’ Wolf classic heavy cotton tee features a photo shot at Joe's Place in Massachusetts in 1974, when he was already a living legend, having been idolized by the biggest rock n roll bands in the world.

His band that night was Eddie Shaw on sax, Hubert Sumlin on guitar, and a couple of colorful musicians named Detroit Junior and Chicken House Shorty on keyboard and bass. Little more than a year later, Wolf's failing health declined and he passed away following surgery. 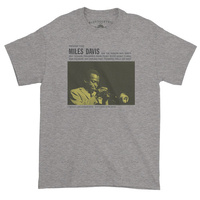