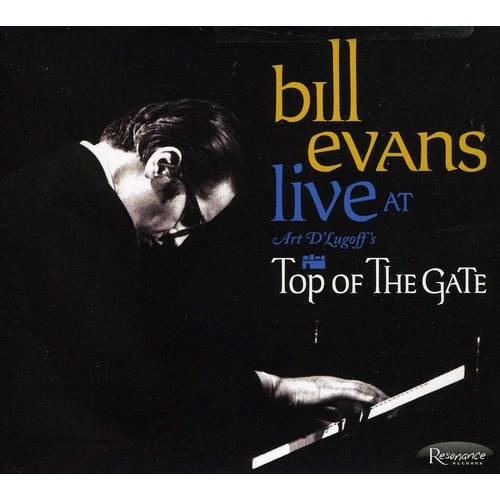 Bill Evans - Live at Art D'lugoff's Top of the Gate

There have been many posthumous releases featuring various Bill Evans trios since the pianist's death in 1980, but Live at Art D'Lugoff's Top of the Gate is a cut above most of them for several reasons.

First, it documents Evans' trio with bassist Eddie Gomez (who had been playing with him since 1966) and drummer Marty Morell in the early weeks of this band's existence.

Secondly, the session engineer, George Klabin, got permission from Evans' manager Helen Keane to record the performances for his radio show, and though he didn't get an opportunity to do a soundcheck prior to the start of the gig, his excellent mike placement and adjustments on the fly capture the intimacy of the trio, without distortion and with very little chatter from the often noisy Manhattan crowds of the late '60s.

Finally, the interpretations of several of the songs, all known to fans familiar with Evans' repertoire, in several cases represent an early live trio recording or one of the earliest recordings of certain songs.

The fact that the trio was new matters little, the chemistry developed quickly between the three musicians as a unit and Evans is buoyed by Gomez's inventive basslines (it's little wonder he remained with the pianist for over 11 years), and Morell's light touch on drums and subtle brushwork.

Several of the numbers are repeated in both sets, including driving takes of "Yesterdays," melodically rich treatments of "'Round Midnight," and two buoyant renditions of "Emily." Evans' fans will delight in his introspective, somewhat disguised arrangement of "California, Here I Come," the dazzling workout of "Autumn Leaves," and the magical romp through "Someday My Prince Will Come."

If the music isn't enough, the detailed liner notes as to how the recordings came to be made, along with commentary by Nat Hentoff, Gary Burton, Eddie Gomez, Marty Morell, and others, in addition to period photographs of the artists and the club's interior, make it a complete package, not some carelessly packaged collection of previously unknown performances.

One can only hope that Resonance label owner George Klabin recorded many other shows at the Top of the Gate and is able to gain the rights to issue them. This two-CD set will be considered essential by Bill Evans collectors. ~ Ken Dryden, Rovi