Bo Carter is the alias for singer/guitarist Bo Chatmon, a member of the famous Chatmon family from Mississippi (which produced 13 musically capable children). Notorious for his double-entendre blues, Carter based his songs around sexual metaphors and the results were, unsurprisingly, widely popular. If there were such a thing as parental warning stickers in the 1930s, they would have been applied liberally to Carter's releases.

On Banana in Your Fruit Basket (the companion to Twist It Baby), Yazoo brings together 14 more Carter sides from the 1930s. A cursory glance at track titles alone tells a great deal: "Mashing That Thing," "Don't Mash My Digger So Deep," "Pin in Your Cushion," "My Pencil Won't Write Anymore." The themes in Carter's music were certainly pervasive in the country-blues of the period, but they were rarely as explicit. Whereas one singer might ask "Baby, where'd you stay last night? You got the hair all tangled and you ain't talkin' right" (a stock blues verse), few would ask the same woman "Baby, what kind of scent is that?" when she walks through the door.

Often, Carter's metaphors are so thin that the results have little value beyond their novelty. Musically, Carter has a relaxed, clear, and fairly indistinct singing style and a fluid, fingerpicking guitar attack to match it. While Banana in Your Fruit Basket paints an accurate picture of Bo Chatmon's alter ego, the music is very much a product of its time. Giving insight into what people appreciated in their entertainment, it also feels like proof that not much has changed. 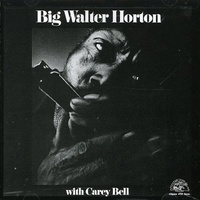