A Blue Note essential, Happenings is part of the Blue Note 75 anniversary vinyl reissue campaign - featuring 100 titles. Key to the initiative is high quality audio at affordable prices. Happenings was originally released in 1967 on Blue Note. Features six compositions by Hutcherson and one by Herbie Hancock. Bobby Hutcherson is a jazz vibraphone and marimba player. He has influenced younger vibraphonists including Steve Nelson, Joe Locke and Stefon Harris. 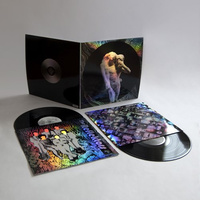