Watching Joni Mitchell morph from acoustic chanteuse to sophisticated interpreter of jazz, accompanied by geniuses like Pastorius, Shorter, Metheny and Brecker, among others, truly floored Debra Mann. The piano/voice teacher and Berklee grad seized on the idea of taking Mitchell's material further into jazz and began trying it out at clubs. It captivated her audiences in the same way it did Mann herself. "Joni's lyrics, combined with her gorgeous melodies, carried on the wind of her unique voice, struck deep chords of feeling within me, and helped to frame that world with colors and sounds and meaning that I could understand and relate to." "Full Circle" reflects on a lifetime of admiration for an artist who has been uncompromising in her approach to music and in writing, and this on the occasion of Mitchell turning 75 years old this year.

"Not only is it really incredible material to work from," says Mann, "it amazes me how universal Joni's music is and how so many people respond to it." On Full Circle, Mann and her sidemen - saxophonist Dino Govoni, guitarist Jay Azzolina, bassist Dave Zinno and drummer Marty Richards - reimagine some of Mitchell's most popular tunes, holding onto the timeless melodies while overlaying it with an irrepressible swing feel, especially on songs like "Black Crow," "Big Yellow Taxi" (from 1970's Ladies of the Canyon) and the haunting "Blue," the title track from her epic 1971 album rendered in bossa nova style. "I've tried to keep it very recognizable by not changing it up so much, but still putting a jazz lens on it." For Mann, that's mission accomplished. 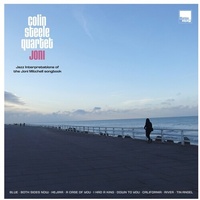