Dexter Gordon - Both Sides Of Midnight

Dexter Gordon's 'Both Sides of Midnight' from Black Lion Records, remastered for the first time in decades by legendary engineer, Bernie Grundman. Recorded in the summer of 1967 at Montmartre Jazzhuis in Copenhagen, Denmark, Both Sides of Midnight is considered to be one of Dexter Gordon's best recorded performances. The title references Gordon's role in the full-length feature film, Round Midnight. Dexter plays extended solos, backed by a rhythm section of Kenny Drew on piano, Neil's-Henning Orsted Pederson on bass (21 years old at the time), and Albert 'Tootie' Heath on drums. 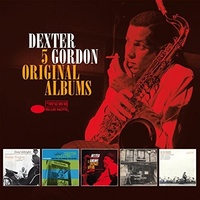 Horace Parlan - Up & Down