Like most Blue Note artists, Duke Pearson moved toward commercial-oriented soul-jazz in the late '60s. At least, How Insensitive was supposed to be commercial. Pearson simplified his original compositions, chose standards like "Stella By Starlight," and covered contemporary pop songs like Jobim's "Lamento." He also assembled a large band with rock instrumentation like electric guitars, bass, electric pianos, and drum kits. Most importantly, he hired the New York Group Singers' Big Band -- a group of singers that are arranged like a horn section (males are the trombones, females are alto saxes, etc.) -- to sing on each song. The vocalists may be technically gifted -- in particular, Andy Bey has a rich voice -- but their presence on these arrangements is quite bizarre, especially since they take center stage. Each song on How Insensitive boasts extravagant, layered arrangements that flirt with schmaltz, but the voicings and attack are so unusual, the result is a weird variation on easy listening. There is little opportunity for Pearson to showcase his tasteful playing through improvisation, yet the arrangements are so off-kilter, the music never quite works as background music. In other words, it's a very interesting failure and one of the strangest by-products of Blue Note's late-'60s commercialization. 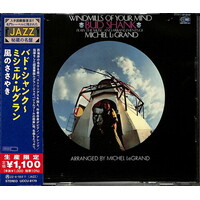