The late sixties were the experimental years in 'pop' music, the years of flower power and psychedelica, the years of Jefferson Airplane and The Doors in the U.S.A. and The Move, The Animals and Sgt. Pepper in the U.K. The traditional two minute songs made place for stretched out tracks which could become up to a full LP sized 20 minute marathon. With Every One Of Us, originally released in 1968 on MGM records, Eric Burdon did his part in bringing music to a new level never heard before. Famous for many big hits in the mid 60's like 'House Of The Rising Sun' and 'It's My Life' Burdon, with Zoot Money on the Hammond, surprised the music world with this top psychedelic blues album. 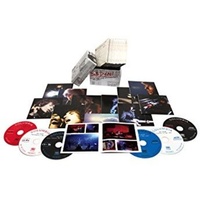 Steve Winwood - Back in the High Life