The release of this album marks a poignant moment: the tenth anniversary of the tragic and premature death of Esbjorn Svensson on 14 June 2008.

During the last ten years after the end of e.s.t. there have been constant reminders of the indelible mark which the band has left on the international jazz scene. Indeed it is hard to imagine a whole generation of currently highly successful young bands all over the world, often attracting an audience of same age, without the deep and lasting influence of the sound and the aesthetic of e.s.t. It might sound like a cliché but it is evident that through his music, Esbjörn Svensson will stay with us forever.

The trio really was a phenomenon. Its scale, recognition and impact grew progressively and internationally during the seventeen years of its existence. British audiences, for example, took e.s.t to their hearts, and in a special way. Things began quietly when they first performed one night in the tiny Pizza Express Jazz Club in Dean Street in the late 1990’s, and their footprint in the UK just kept growing steadily from there, until they were packing out concert halls. It is part of a similar story in many European countries. They were not just met with massive success in Germany and France, they truly went Europe-wide. And they also reached out further: they were the first European band ever to appear on the cover of Downbeat in May 2006, the magazine’s seventy-third year.

In 2006, one year after „Live in London“ was recorded, they played over 100 concerts in 24 countries and were heard by 200,000 people. That unforgettable experience of e.s.t. playing live has been caught before on CD, notably in "Live in Hamburg", which was named the “Jazz album of the decade 2000–2010” by The Times, whose critic wrote: “In a decade when Scandinavia staked a claim as the home of progressive jazz, no one had more success than this piano trio.”

Jamie Cullum described the appeal of their live concerts: „e.s.t. are a jazz trio, only I can take my non-jazz friends along to see them.” This new release was recorded at a completely sold-out Barbican Centre in 2005, during a hugely successful and highly popular UK tour. It is e.s.t. at the peak of their creativity touring after the release of their to-date best selling album “Viaticum”. The organic and natural way in which the set evolves is remarkable, and there is plentiful evidence of what Canadian critic John Kelman has called their “unique simpatico.” For people who know and remember the band well, the absolute gem here is a serene, deliciously poised account of “Believe, Beleft, Below.” 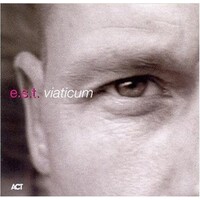