"Eugene and Henry have been playing together of nearly 43 years. Back in 1977 they recorded a guitar duet that Wadada Leo Smith had presented to them: WIND CRYSTALS. This piece was released on Henry's first album on Eugene's Parachute label: ICE DEATH. On the 40 year anniversary of the original Wind Crystals, Henry and Eugene recorded an entire album of guitar duets composed by Wadada, including a re-recording of Wind Crystals. This album contains pieces from several different phases of Wadada's work from the past 40 years.

Besides celebrating their longtime music friendship, the project also celebrates both guitarist's long time friendship with Wadada. All of the duets here are acoustic and feature the focused attention to tiny sounds that Eugene pioneered in the 70's. From a swinging jazz track to abstract and complex organizational principles that Wadada envisions int he preset moment, a full range of colors and expressions results from the duo's creative expansion of Wadada's scores." 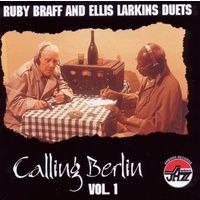