Netherlands jazz diva, Fay Claassen joins forces with Belgian singer-composer-lyricist and longtime Parisian David Linx on “And Still We Sing”, a magnificent collaboration with the WDR Big Band, conducted by Magnus Lindgren. On this release Claassen brings her crystal clear delivery and adventurous scatting chops to the program, blending superbly with Linx with whom she has a special musical connection. Central to the album is the contribution of the world renowned WDR Big Band conducted by Magnus Lindgren who also contributes a number of the arrangements. Further arrangements were contributed by the album’s producer Paul Heller along with contributions by Bob Mintzer and Michael Abene. This album is Fay’s third production with the WDR Big Band under her own name and follows the 2010 release “SING!” and “The Dutch Songbook” released in 2018. 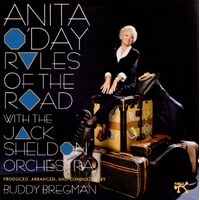 Anita O'Day - Rules of the Road