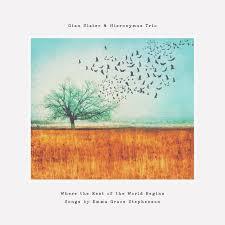 Gian Slater & Hieronymus Trio - Where the rest of the world begins

This has such a fragile, diaphanous beauty that I sometimes had to remind myself to breathe as I listened. The spell is cast by music that is sophisticated in both conception and execution, and results from an astoundingly fruitful collaboration between Sydney's young Hieronymus Trio and the more established Melbourne vocalist Gian Slater.

The trio's gifted Emma Stephenson has composed six songs that fall within the somewhat foggy realm of art music as much as they do jazz, and the diaphanous beauty is built upon ever shifting fabric, like a butterfly's wing changing colours with the light. That Stephenson can not only generate such original melodic, harmonic, rhythmic and especially structural ideas, but also pen enthralling lyrics, marks her as a bold new force in local creative music.

As an improvising pianist she has developed a distinctive vocabulary in conjunction with the understated work of bassist Nick Henderson and drummer Oli Nelson, while Slater brings the grace and purity of her voice (plus her unerring instincts for musicality) to bear upon the words and airy melodies.