Recorded in Amsterdam’s  Musikgebouw and Haarlem’s Philharmonie between March 2013 and July 2016, this 3-CD Set is a milestone in the documentation of Hungarian composer György Kurtág’s s work and also a labour of love.

It brings together all of Kurtàg’s works for ensemble and for ensemble and choir. The insightful and precise performances bear witness to extensive preparation by the dedicated Asko/Schoenberg Ensemble. Conductor Reinbert de Leeuw  speaks of “learning Kurtág’s oeuvre step by step, and performing these pieces repeatedly over a period of twenty years.”

De Leeuw consulted extensively with György and Márta Kurtág before and after each session: “There were moments when I was overwhelmed at first hearing”, says the famously-demanding Kurtág, “and we could embrace the result immediately. But sometimes we were critical. The fact that Reinbert always listened to our remarks and re-recorded fragments or even whole pieces makes this publication authentic.”  Works heard here are presented in chronological order of composition. 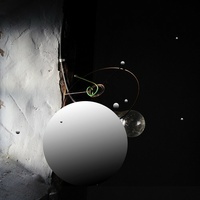 Fred Thomas - Three Or One