This recording, a document of a live concert, was originally supposed to have taken place on February 12, 2017. We’d been on the road for a week in Canada and had had cold but clear weather the whole time. That couldn’t last. Sure enough, by the time we got to Kingston, Ontario on February 9, it was snowing peacefully. The snow ended up sticking. I remember sitting in my hotel room when Glenn Siegel, the presenter from Northampton, called. The forecast called for more and more snow, so we decided to cancel the February 11 gig and set a makeup date for a few months later. Jeb, Jason, Tony and I drove south from Ontario for hours until we finally got to Albany, halfway point to end-of-tour respective homes and airports and stayed the night in a hotel there. A bit dogy, that snowy drive was.

On June 11, 2017, Jeb, Tony, Jason and I met on a warm June afternoon at the home of the Pioneer Valley Jazzshares presenters, Glenn Siegel and Priscilla Page, in Northampton, MA. Playing a Jazzshares concert always has a really lovely vibe, super warm and community-centric. The ticket model is such that the audience buys a season of shows in advance and, as a result, the room is full. Before the gig and after, collegial conversation, delicious food and drink are the norm. It’s one of my very favorite gigs in North America for sure. The music on this recording crackles with that alive-ness and warmth.

I know it sounds of a piece, but seriously, grab a plate of salad, roast some delicata squash and spread it with feta on good grilled bread, pour a glass of wine or beer, maybe invite a friend over, have a seat, and take a listen. That’s pretty much how it happened that evening.

Mixed by Jonathan Goldberger at Down Home Labs, August 2017.
Mastered by Mikey Young.

Thanks to Glenn, Priscilla, and everyone at Jazzshares, Ingebrigt Haker Flaten and Sonic Transmissions, Nate Cross and Astral Spirits. Steve Turre - Colors For The Masters Adam Simmons - The Usefulness of Art 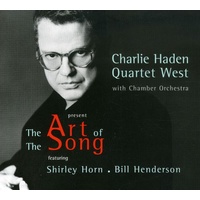 Charlie Haden Quartet West - The Art of the Song Duke Ellington - "...and his mother called him Bil