Herb Alpert - Over The Rainbow

As one of the worlds most renowned and celebrated trumpet players, Alpert has once again broken the mold with a collection of songs that spans decades. “This project started like all of the other albums that I have recorded throughout the years, including the Tijuana Brass projects. I am always looking for good melodies to play and if it is a familiar song that I am working on, I’ll try to do it in a way that it’s never been heard before,” says Alpert. “When choosing songs, I look for something that makes you feel good, I have learned to become an audience to my own music and listen to what creates feelings that stop and call you.”

Recorded at both Alpert’s studio and at famed Grammy winning and multi-nominated engineer, arranger and mixer Jochem van der Saag’s studio, Over The Rainbow was recorded in eight months and boasts a roster of pop, classic and international hits that are familiar to all ages. The first song on the album is “Skinny Dip,” an original co-written and produced by Alpert, followed by 11 others including “Ain’t No Sunshine,” “All Love,” “Fantasy,” “Over The Rainbow,” “Copacabana,” “With You I’m Born Again,” “You Are So Beautiful” “Nature Boy,” “Always On My Mind,” “South Of The Border,” and “What A Wonderful World.” 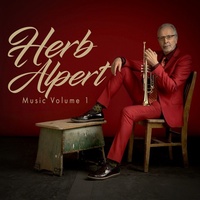