Holopeak have been gaining attention for their visionary pursuit of improvised experimental-rock and the intensity of their live performances.

Having developed a cult-like following around Sydney as part of a growing renaissance in creative music, their debut album Summit Over, out on Earshift Music, signals the arrival of a band with promise for greater things. Summit Over demonstrates the raw power of the trio, from symphonic-like noise rock to haunting experimental soundscapes, creating music that is unflinching in its conviction and energy.

Drawn together by an interest in exploring ways of organising improvised music, Holopeak formed in 2017 whilst studying jazz at the Sydney Con. The group soon found they had a unique chemistry: “the goal for our music was to leave the listener (and band) in a state where we were unaware as to what might happen next,” says Mielzcarek, “our fundamental concept has always been to develop simple ideas across long periods of time, but the results are never the same.” Through regular shows in underground venues around Sydney and Melbourne, they entered the studio in late 2018 to document the group at that particular time. “We found that the band’s sound was constantly evolving but were excited by some of the things that were happening live on gigs. We felt it was the right time to enter the studio to capture where we were at musically,” says Mielczarek.

Summit Over was recorded live in the studio without prior discussion of what was to be played. Two-hours of live material was edited into five tracks. The post-production became integral to the sound and overall arc of the music. “We wanted to make the album have a sense of space but also tell a story,” says Birch, “it was important that it captured the essence of our live performances but could function on its own and withstand repeated listening.

Holopeak's influences include Swans, Brian Eno and Fennesz, although it’s the trio’s individual voices and backgrounds that form their unique sound. Guitarist Nick Mielczarek is quickly establishing himself as a talented improviser, recently releasing recording a duet album with Sydney drummer Miles Thomas. Wollongong raised bassist Harry Birch has worked with notable jazz pianists Barney Mcall and Novak Manojlovic, among many others. Korean born Chloe Kim is a rising star on the Sydney jazz scene, recently being featured in SIMA's Sonic Futures program and described by Sydney Morning Herald as “the first percussionist to draw on the innovations of Australia’s master-drummer, Simon Barker.” Together they represent members of a new generation of Sydney musicians finding a path for their music through process-driven musical discovery. Alister Spence Trio - Not everything but enough 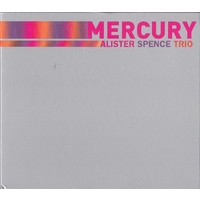 Tony Gould - on the art of creative music