In several respects, this is a very strange album, though the music isn't strange at all and is in fact quite typical vintage Jimmy Reed. First, despite what the title might lead you to believe, this is not a live recording; all 23 of the tracks were done in the studio. Not only that, they weren't even performed at New York's famed venue Carnegie Hall, although producer Calvin Carter would later claim they were; instead, everything was cut elsewhere.

According to Pete Welding's notes to the record in the year (1961) the double LP was first issued, one-half is devoted to "recreations of some of Jimmy's most celebrated and biggest-selling recordings," while "the second LP here is Jimmy's celebratory recreation of his highly successful appearance at august Carnegie Hall this past May." Even that doesn't really clear up things, however, as it certainly seems as if in many if not all cases where songs were previously issued by Vee Jay on other Reed releases, the versions used here are identical. It seems like a lot of trouble to go to for creating an album that, to be blunt, is pretty deceptively titled and packaged.

For all that, however, the music is pretty good, if not exactly essential given that there are more legitimately packaged and logically assembled Jimmy Reed best-ofs. In some ways, it almost does make for a greatest-hits compilation, as it contains most of Reed's most popular tunes -- "Bright Lights, Big City," "Big Boss Man," "Honest I Do," "Hush Hush," "Ain't That Lovin' You Baby," "Going to New York," "Take Out Some Insurance," "You Don't Have to Go," "Baby, Want You Want Me to Do". 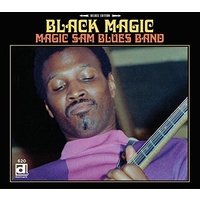