A master of his craft and a consummate guitarist Jody Williams had a unique and highly sought after sound; he was hugely respected, and was equally influential. Here are 28 examples from his prolific career as both a sideman and as a solo artist between 1954 and 1962 and all of them showcase his flamboyant technique and unique chord changes. Features his contributions to classics from Bo Diddley, Howlin' Wolf and Jimmy Rogers. 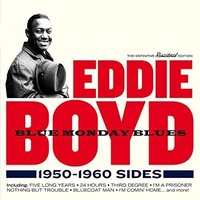