The early Seventies were a time of accommodation for jazz and rock. Joe Henderson even had a brief 1971 stint in the horn section of Blood, Sweat and Tears; and Larry Willis, keyboard player on this album, joined BS&T shortly after Henderson left. The stellar band assembled here shows more of these fusion leanings than it might if assembled today–one doubts that Henderson would ask Willis to play electric keyboards, or drummer Jack DeJohnette to place as much emphasis on funk rhythms. (Dave Holland, a recent Henderson collaborator, still has his electric bass in mothballs.) This is not to discount Multiple‘s distinct energy and groove, or its uniqueness in Joe Henderson’s discography with its overdubs (including the leader’s vocals) and the brief presence of James "Blood" Ulmer. DeJohnette and Holland each contribute tunes, plus an infectious, uncoiling momentum that makes the date a most congenial meeting of giants. 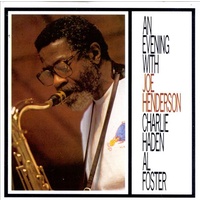