Vinyl LP Live at the Village Vanguard Again! is one of the more hotly contested albums in John Coltrane's catalog. Released less than a year before his death, the original recording showcased his new quintet with Alice Coltrane, piano; Pharoah Sanders, tenor saxophone; Jimmy Garrison, bass; and Rashied Ali, drums. Additional percussion on the date was provided by Emanuel Rahim. The three selections here are what survive from a much longer tape. Coltrane's signature ballad "Naima" opens the album and goes on for over 15 minutes. One of the most iconic tunes in his repertoire, the treatment it is given here is radical. While the melody is referenced in the beginning, Coltrane moves it aside fairly quickly to concentrate on improvisation. His tenor solo (heard in the left channel) begins in earnest a minute-and-a-half in. He gradually deconstructs the various phrases in the lyric to blow passionately through them. By the time Sanders begins his (overly long) tenor solo (right channel), the abstraction becomes total. His intensity and ferocity are simply more than the ballad calls for. Even when Coltrane returns to solo again, and gradually winds it down, he has to begin at that hot peak. "Naima" is a different tune when all is said and done. "My Favorite Things" is in two parts. The first six minutes belong to a gorgeous, imaginative solo by Garrison. The tune's familiar theme is not stated by Coltrane until after the mode is introduced; then bits and pieces of the melody are brought in until they become -- however briefly -- the whole head line. It disappears quickly -- even though referenced occasionally throughout Coltrane's solos. His soprano solos are intense but utterly beautiful. His playing is pure passion and creative imagination, ever aware of the shimmering block chords played by Alice. Ali skitters propulsively around them, driving insistently until he's allowed to let loose when Sanders and his tenor begin their violent wail that simply disregards the entire tune save for one quote near the end to bring Coltrane back in. Sanders screams through his horn throughout his solo, and when Coltrane rejoins him, it's to meet him and try to rein him in; it leaves the listener exhausted after its 25-minute run. Live at the Village Vanguard Again! is certainly not for Coltrane newcomers, and may indeed only hold value for his most ardent followers despite its many qualities. AllMusic Review by Thom Jurek 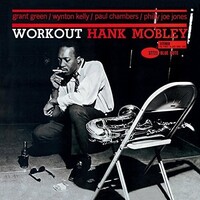