John Coltrane played the long game. Longevity in life wasn’t his lot; his fortieth year being his final bow. That circumscribed career, particularly in its final decade, evinced a trajectory of creative ascendancy that was as indelible to improvised music as it was omnipresent in impact. Charlie Parker arguably wears the posthumous mantle of most influential saxophonist, but Coltrane suggests a close contender in terms of ineluctable clout on those who play the instrument.

Practice and the pursuit of technical prowess present a through line from Coltrane’s Philadelphia-based beginnings to his last months in the summer of 1967. Lifelong friend and peer, Jimmy Heath, abstracted the obsession only half facetiously as a 25-hour-a-day regimen. Length and complexity of variation and extrapolation became integral parts of Coltrane’s sound; he was constantly learning, constantly putting in the work.

Years later, on a final European tour as a member of Miles Davis’ Quintet the striking contrast in emphasis with his bandmates lead to a famous anecdotal exchange between bandleader and sideman where the former advised the latter that the “solution” to ending his solos was “taking the horn out of his mouth.” Miles was right, of course, but his reductive prescription also missed the point of Coltrane’s musical loquaciousness. At the helm of his own ensembles, post-Davis, Coltrane’s already leg- endary dedication to his instrument only intensified.

Everything came together from an ensemble perspective with the formation of the quartet comprising McCoy Tyner, Jimmy Garrison and Elvin Jones. Piecemeal in construction rather than immediate, the process progressed gradually as each member became available for conscription. Once again, Coltrane played the long game, biding his time and audition- ing alternative options like pianist Steve Kuhn, bassists Reggie Workman and Art Davis, and drummers Pete La Roca and Billy Higgins for varyingly transitory tenures until the preferred puzzle pieces finally locked into place.

By the arrival of the quartet’s Newport Jazz Festival engagement in the summer of 1963, they had been a working unit for the better part of a year. Jones, in the throes of escaping a tenacious heroin habit, was unavoidably absent the gig. So Coltrane tapped one of the most versatile drummers of time, Roy Haynes, as pro tempore stopgap. A consum- mate professional with a voluminous swing-to-free jazz versatility, Haynes’ enthusiastic presence made for a subtle deviation in group dynamics with snare eclipsing cymbals as propellant and a pliable porousness replacing Jones propensity for polyrhythmic density. Coltrane first recorded “I Want to Talk About You” at a studio session for the Prestige label that would result in his 1958 album Soultrane. By 1963, the Billy Eckstine standard was a regular part of his performance repertoire, appearing on both the Newport and Birdland set lists, but in very different guises than the earlier iteration. In both subsequent versions, he strains and strives against the strictures imposed by his instrument and the song structure. The solo cadenza, which became at once signature and signifier of the piece, is rife with the kind of rapid chordal overlays initially codified several years earlier as “sheets of sound,” but here jettisoned from any underlying structural supports other than those working extemporaneously in his mind at the time.

“Impressions” also stands out as a telling precursor of expansive improvisational itineraries soon to come. Not atypical in terms of its extended length, recording distortion marred Garrison’s bass solo during the piece and led to an unfortunate excision. It’s still a performance rife with immersive interest including the eleven-minute tenor and drums duet that occupies the second half where Haynes creates a rigorously shifting rhythmic framework without ceding even a modicum of poise and drive. The other compositions covered on both dates are memorable for their own merits, but it’s here where the crystal ball convergence of Coltrane’s late game music feels most foretold.

Material from the quartet’s concert at Birdland in October, presents a different, more emblematic aural picture than the Newport set. Jones is restored on drums Coltrane composed the deeply elegiac dirge as an aural homage to the four schoolgirls murdered in a Birmingham church bombing in September. Its inclusion here is intended as an expression of solidarity with the Black Lives Matter movement and the surrounding campaign for social justice that’s risen out of the current era of amplified mortality, divisive strife, and individualistic tooth-and-nail acrimony. Coltrane’s quartet was, particularly on the concert stage, the opposite of these corrosive invectives. Its members comprised a fraternal formation, fused by the faculties and forward-thinking of its fearless leader, but also complete individuals encouraged to realize their fullest selves in pursuit of communal expression. - Derek Taylor

Another superbly remastered ezz-thetics release, this time of the Impulse albums Newport '63 and Coltrane Live At Birdland, both recorded in 1963. (Under Swiss law, recordings made up until 1969 are in the public domain, and as a member of SUISA, the Swiss Cooperative Society for Music Authors and Publishers, Uehlinger pays due royalties for the compositions on them). When the Newport Jazz Festival tracks were recorded, Roy Haynes was depping for Elvin Jones, who had been busted for heroin possession and, to avoid jail time, was spending three months as a "volunteer" patient at the National Institute of Mental and Clinical Research Center in Lexington, Kentucky.

Haynes' approach is lighter on its feet and less polyrhythmic than Jones' but his playing is masterly and, in its own way, satisfyingly intense. The extended tenor and drums duet at the end of "Impressions" is a stone delight, and benefits greatly from the remastering. By October 1963, when Coltrane Live At Birdland was recorded, Jones is back and the quartet's trademark heavier, polyrhythmic sound is restored. The album includes outstanding versions of "Afro Blue" and "I Want To Talk About You." (Another highlight is the heart wrenching "Alabama," one of two tracks which were recorded a month later at Rudy Van Gelder's studio, and was included on Impulse's CD reissue of Coltrane Live At Birdland). 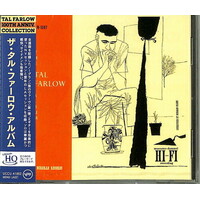