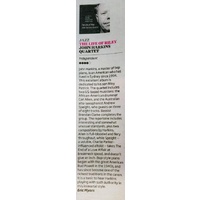 “Life of Riley” is the seventh album from pianist/composer John Harkins and his first release since “The Girl Next Door” over three years ago.  Since coming to Australia nearly 25 years ago, Harkins, a Chicagoan and a product of the great Chicago/Detroit jazz piano tradition – think Tommy Flanagan, Barry Harris, Kirk Lightsey, Geri Allen among many – has established himself in the front rank of the local jazz scene.

He’s what’s known as a hard swinger, possessing great time and exciting drive, effortlessly taking the listener on the musical journey he is creating. It’s an exciting ride but Harkins also brings rich colours and deep emotion to his playing.  Check out his beautiful, rich playing here on ‘I Wished the Moon’ and even more so on ‘I Love Paris’.

Bebop based players can sometimes be accused of creating solos that are technical exercises, impressing the listener but not making them want more. The best ones of course don’t and John Harkins takes his place alongside Melbourne’s Mark Fitzgibbon and Canberra’s Wayne Kelly as an outstanding bop pianist.

Over the last six years he has recorded five albums with that superb drummer Joe Farnsworth, one with the drummer on this album, Carl Allen and there’s a soon to be released piano/bass duo recording with Rodney Whitaker. Not bad going in a tough jazz scene.

They hire him because they like him as did the many leading jazz figures with whom he’s shared the stage over so many years – Eric Alexander, Terrell Stafford, Warren Vache, Ted Nash, Marcus Printup, Wycliffe Gordon, Jerome Jennings, Vincent Gardner, Charles McPherson as well as singers Jackie Allen, Mark Murphy, Laverne Butler and Kurt Elling.

If this list is a recommendation for John’s talent then it might be a great idea to add “Life of Riley” to your CD collection.

The end of a love affair

The life of Riley

I wished on the Moon