In 1979 Joni Mitchell took to the road with arguably the greatest backing band ever assembled in the history of popular music. That year s studio release Mingus had revealed that her musical heart belonged to jazz. Her record company and the critics were unconvinced but Joni was unstoppable. She hired bass phenomenon Jaco Pastorius as musical director for the tour and he in turn secured saxophonist Michael Brecker and guitarist Pat Metheny as the front line.

Those in attendance for the performance at Forest Hills Tennis Stadium, NYC on August 25th 1979 enjoyed a set list spanning her career to that point (with emphasis on Mingus, Hejira, and Hissing Of Summer Lawns) and witnessed Joni at the height of her powers. Re-mastered original WLIR-FM broadcast, and presented here with background notes and archival imagery. 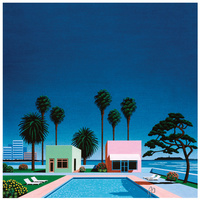