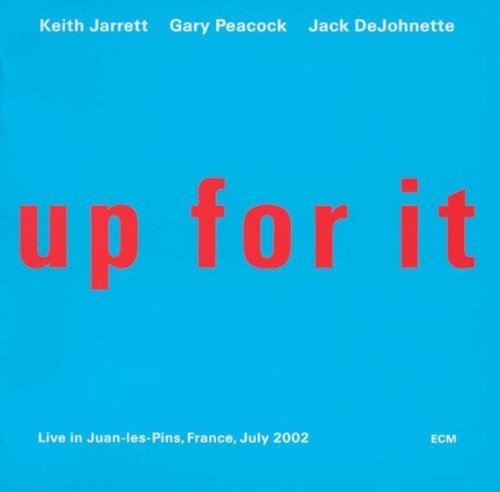 Keith Jarrett - Up for It: Live in Juan-Les-Pins

2003 Release For a trio that has been together this long (over 20 years), Keith Jarrett, Gary Peacock, and Jack DeJohnette still play with the enthusiasm of a group of people discovering each other for the first time. That's no cliché. One listen to "If I Were a Bell," the opening track on this live set, reveals how footloose, free, and excited these three can be when they encounter one another on the stand. Certainly, the near symbiotic relationship they have built over time makes the freewheeling feeling come easy. But that's a bit misleading in a sense, because if the listener pays the slightest bit of attention to how the rhythm section works with Jarrett, it becomes obvious just how much listening is going on in this conversation. Jarrett's timbral and dynamic palettes can change on a dime, and Peacock and DeJohnette never miss. The other wonderfully breezy thing about this set is that all of the tunes are from the jazz canon except for the title track, which closes the album and is a Jarrett original. From Frank Loesser's "If I Were a Bell," the band literally charges into Oliver Nelson's "Butch & Butch" at a furious tempo. DeJohnette pushes Jarrett on the tempo, and Peacock walks through the middle, balancing out not only time but harmonic equations in Jarrett's extrapolations on the melody. Nonetheless, despite the sprints -- "Scrapple From the Apple" by Charlie Parker is another down the line -- they never cease to literally amaze on the ballads. Here, "My Funny Valentine," "Autumn Leaves," and the just under mid-tempo "Someday My Prince Will Come" are given such impeccable lyrical treatment it's almost breathless. One of the most exciting tracks here, especially since it begins the last third of the program, is the inclusion of John Lewis' "Two Degrees East, Three Degrees West." The gorgeous stride Jarrett plays, which is all his, stands in amazing contrast to the original light-fingered version played by the composer. Jarrett invokes Fats Waller and early Ramsey Lewis in the blues feel while keeping his own sense of tempered attack through the shimmering shades of blue and green in the minor keys. This is one tough track in feel and emotion. The rhythm section doesn't just walk it either; they slip under and around Jarrett to fill out the edges, making this a beautiful dialogue piece. Up for It is a dynamite set, as refreshing, spirited, and innovative as any Jarrett has ever released, but full of good vibes too. AllMusic Review by Thom Jurek