Recorded in 1981 and 1982 respectively, these two albums feature a who's who of modern jazz musicians including Harvey Mason, Tom Scott, Richard Tee, Nathan East, Greg Philinganes, Carlos Vega and Paulinho Da Costa to name but a few. Rit was Lee Ritenour's most successful album peaking at #26 on the Billboard chart, and staying on the chart for a 23 week stay, the album featured the singles 'Mr. Briefcase' and 'Countdown (Captain Fingers)'. Rit 2 made the Top 5 in the jazz charts, and stayed on the Billboard chart for 14 weeks, "Cross My Heart" was the debut single from the album that featured vocals by Eric Tagg, who is also prominent on Rit.

These were the only albums Ritenour was to record for Elektra, as he moved to Dave Grusin's GRP label where he picked up a Grammy award for an album he released with Dave Grusin titled Harlequin. Over the years Lee Ritenour has played guitar for many superstars including Barbra Streisand, Tony Bennett, Barry White, Aretha Franklin, The Four Tops and Carly Simon. 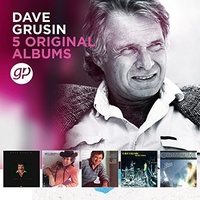