He is best known for being the drummer of Chick Corea's Return To Forever. As far as Jazz-Rock-Fusion albums go... this is one of the very best. Very impressive for his first solo album! This album, originally released on Nemperor Records, made the Billboard Music Charts on 1/31/76. Guest musicians include Hubert Laws, Al Di Meola, Larry Coryell, Jimmy Smith, David Sancious and Larry Young 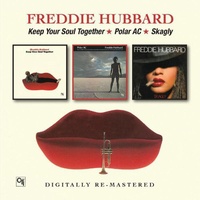 Freddie Hubbard - Keep Your Soul Together/ Polar A