Manu Katché went to the Conservatoire but his musical origins are to be found in rock music. Even though the drummer extraordinaire has listened to a lot of jazz music, he hasn't played that much of it. The case gets even harder to crack when you listen to Katché's tenth album, The ScOpe, where he digs deep into the roots of groove music all the while incorporating the modern sounds of machines.

The album cover designed by Arno Lam appropriately pictures Katché sideways - "an African profile" he says- and indeed Africa is the underlying musical theme of the whole album. But this sensual statue is highly flammable if you consider that Manu Katché also knows about dancing - he practiced it as a kid, goes out dancing in clubs "and after all, you need all four limbs to play the drums" he himself remarks. The drums are then naturally at the center of The ScOpe, an electro album with both a carnal and a celestial touch - a sort of frenetic spasm lingering on with pleasure and revival.

The album comes to complete, rather than strictly break with, his past discography - that of an expert musician who has been solicited by Sting, Peter Gabriel and Véronique Sanson among others. "I have built the tracks around the drums, and it is no wonder I've always played that instrument - my dad's from the Ivory Coast. I wanted to see people move, dance and sing the gimmicks when they listened to it." 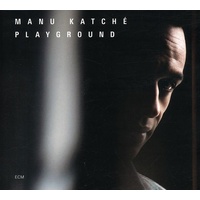