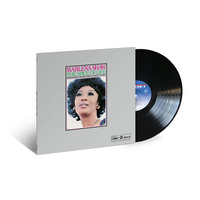 Produced and arranged by Richard Evans and Charles Stepney, the album featured Shaw’s seminal version of the classic Ashford & Simpson composition ‘California Soul.’ The new edition is pressed on 150 gram black vinyl with a tip-on jacket featuring a faithful reproduction of the original artwork.

The album originally appeared on the Chess Records subsidiary Cadet Records and brought critical acclaim to the artist from New Rochelle, New York. Shaw had reached the top 40 of the US R&B chart in 1967 with the Cadet single ‘Mercy, Mercy, Mercy,’ but The Spice Of Life showcased her alto voice and mature delivery on a range of styles ranging from psych-blues via gospel soul to vintage pop.

As well as the much-covered and endlessly sampled ‘California Soul,’ the album included Shaw’s memorable version of Gerry Goffin and Carole King’s ‘Go Away Little Boy,’ jazz and blues staples such as ‘Stormy Monday’ and ‘I Wish I Knew (How It Would Feel To Be Free)’ and the Barry Mann/Cynthia Weil song ‘Looking Through The Eyes Of Love,’ popularised in 1965 by Gene Pitney.