Melody Gardot - My One and Only Thrill - 180g Vinyl LP

In a musical landscape ripe with great singers (of which she is one) it is Melody's unique approach to songwriting that sets her apart. Although her songs often sound like jazz, they defy easy categorization. "...a touch of Peggy Lee's poetry, a hint of Norah Jones and Joni Mitchell..."

Melody's tunes already feel like classics, possessed of a timeless quality rare in today's pop music. The one non-original song here is her brilliant take on the Wizard of Oz chestnut "Over the Rainbow". Two songs on this album were co-written with Grammy®-Award winner Jesse Harris. This album achieves an air of sophistication due to the talents of producer Larry Klein (Grammy® Album of the Year winner for Herbie Hancocks River) and the tasteful orchestrations of Vince Mendoza.

"This is an exceptional album and anyone who thought the great age of the torch singer was over should lend an ear." - The Times of London

"Her songwriting is filled with soft surprise and savvy lyrics..." - SF Chronicle 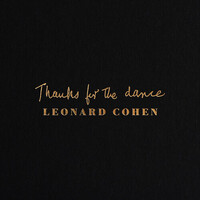 Leonard Cohen - Thanks for the Dance / vinyl LP