Quiet Earth, the new album of the Austrian saxophonist Muriel Grossmann living in Spain. Like the previous album ‘Reverence’, Muriel recorded it on her Ibiza island in the quintet format. Mallorcan organist Llorenç Barceló seems to have become a permanent member of the team with which Muriel Grossmann has been working together for many years.

In her own handwritten liner notes, Muriel speaks of the deep imperfections of our world, which make many feel helpless. She claims that everyone should look for strength and positive energy for change in themselves, and her music should help listeners to find hope and that very positive energy.

Well, for me personally, Muriel Grossmann’s music always evokes the most positive emotions. Quiet Earth, small in volume, was no exception. The album includes only four compositions by Muriel. In the opening song WIEN, the only thing that can be called classical (in a jazz sense) is the construction of the composition, where, after a saxophone solo, Milojkovic’s guitar, then Barcelo’s organ, and finally Grossmann’s saxophone again come to the foreground. But judging by the music, Muriel’s memories of the capital of her native Austria are closer to the architecture of Hundertwasser and Haneke’s films than to the idyllic landscapes of imperial Vienna during the time of Franz Joseph.

The composition AFRICAN CALL with the accentuated work of the rhythm group and bright saxophone colours looks like an echo of African motives that occupied the main place in the previous album ‘Reverence’. The impression that there was simply no place for African Call in that album, but here “Africa” works well in contrast to the European “Vienna”. As for the second half of the album, the pieces by PEACEFUL RIVER and the title piece QUIET EARTH, seem to be the ones who embody Muriel Grossmann’s dreams of how our planet should look like.

What can a musician do for this? To compose music and put into the performance so much expression and talent that the listener feels and remembers this passionate message without words from the great master of modern jazz, Muriel Grossmann. 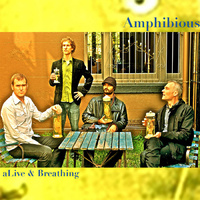