Norah Jones’ Little Broken Hearts was created in collaboration with producer Brian "Danger Mouse" Burton, best known as the producing ace for Gnarls Barkley with singer Cee Lo Green. Jones and Danger Mouse wrote all of the material for the album together at the producer’s studio in Los Angeles, and the duo performed all of the instruments themselves. This is their second time working together — Jones previously appeared as a vocalist on Rome, Danger Mouse’s collaboration with Italian composer Daniele Luppi. Though Little Broken Hearts is the result of a partnership between Jones and Danger Mouse, the record will be credited only to her.

The album’s sound ranges from experimental chamber serenades to stark, electronic-embellished confessions. "It’s obviously very different than anything Norah’s ever done," Burton says. "I don’t know what people will think — I hope they like it, and she doesn’t lose a bunch of fans."

"I’d never gone in with nothing and wrote songs from scratch, and I’d never played bass before on a record," Jones toldRolling Stone. "I was out of my comfort zone — but I was comfortable because we’re friends."

Adds Burton, "The best thing was having just the two of us on those first sessions, not a whole band. Norah had as many, if not more, great ideas than I did."

One of the boldest departures is "Take It Back," which features fuzzed-out guitars and spooky, distorted vocals. "I never knew how to get weird sounds," Jones says. "It was all about finding a balance between those effects and making sure my voice was clear and sounded like me."

In its own quiet way, Little Broken Hearts hews closer to heartbreak classics like Marvin Gaye’s Here, My Dear than to anything in Jones’ back catalog, Rolling Stone reports, "This time, I’ve been way less concerned with self-editing," Jones says. "I’m not sad, but there’s a lot of hurt in there. And it felt great to say what I felt and put it down on tape. Doing that made me so happy! This album is all about saying things that needed to be said." 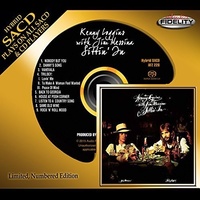