Charles came up with his unique reinvention of popular music by combining blues, jazz and gospel in the mid-50s when he was signed to Atlantic Records. While he made a number of classic albums for the label, his biggest impact was through his incredible string of hit singles. This album was originally released by Atlantic in 1962, soon after Charles left the label for ABC-Paramount, where he would have even bigger success with his reinvention of country music. This record is made up of hits Charles had enjoyed with Atlantic, from the early 'Roll with My Baby', 'I Got a Woman' and 'Drown in My Own Tears' through to the title track and 'Ain't That Love', his last hit for the label. 2005. 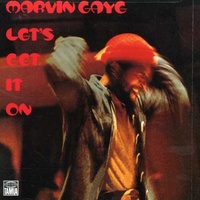 Marvin Gaye - Let's Get It on