An audiophile classic - cut from the original three-track masters! Now playable in three-channel on SACD!

One track - "Baby, It's Cold Outside" - will make this one easily worth the price of admission!

Whoa! Now we're getting into the big leagues. Yowsa! And not just any Ray Charles title, mind you. Ray Charles and Betty Carter! Analogue Productions has reissued a whole lot of classics - a whole lot - but there aren't many of 'em that are a much bigger deal than this.

This is such a romantic album. Such a warm album. Such a rich album. And, ooh, the sound! Turn the lights down. Grab that special someone. And as our Acoustic Sounds/Analogue Productions owner would say, "If nothing happens, don't blame the SACD!"

Originally released in 1961 on ABC-Paramount, Ray Charles and Betty Carter features startling dynamics, with Marty Paich's arrangements showcasing both punchy brass and lush strings. The showstopper, "Baby, It's Cold Outside," topped the R&B charts upon its release. And jazz singer Betty Carter's vocal prowess shines on "Cocktails For Two" and "Alone Together." Ray Charles has never sounded more romantic. 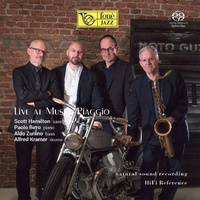