The blind street singer Gary Davis (1896-1972) may have been a minister of the gospel, but he kept one foot in the secular realm. He was quite simply one of the finest finger-pickers ever to play a guitar, a leading practitioner of the ragtime-imbued Piedmont school of blues. The Harlem-based musician had a pronounced influence on other guitarists that stretched over many decades, from fellow Carolinian Blind Boy Fuller in the 1930s to Dave Van Ronk, Bob Dylan, Taj Mahal, Ry Cooder, Jorma Kaukonen, and Donovan in more recent times.

This remarkable all-instrumental album features Davis’s prowess not only on guitar but, on a few tracks, on banjo and harmonica. The good reverend also was famous for his humor, and although he doesn’t sing here, his wit shines through in a little rag he titled "The Boy Was Kissing the Girl (And Playing the Guitar at the Same Time)." 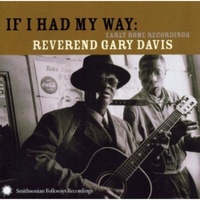