Having only sporadically left his rural hamlet of Brownsville, TN, for recording trips in Chicago and Memphis, blues guitarist and singer Sleepy John Estes must have found it a bit of a shock to make the 1964 American Folk-Blues Festival tour of Europe. Like most contemporary country-blues musicians from the South, Estes did ramble, playing country suppers and plantation parties as a solo act or with a minstrel show, but his exposure to the urban and transatlantic world was still minimal to nonexistent. As evidenced by both reportage and this document of his 1964 trip to Denmark, France, Sweden, Germany, and England, though, Estes mostly enjoyed his first trip abroad, having fun with his international hosts while still living up to his nickname by mysteriously nodding off on several occasions.

Traveling with other blues luminaries such as Howlin' Wolf and Sonny Boy Williamson, Estes teamed up with longtime harmonica partner Hammie Nixon (who also plays the jug on a few tunes here) to cut a batch of numbers at studios in Copenhagen and London. The two cover classic Estes material like "Needmore Blues" and "Drop Down Mama" (most of the material here was originally recorded for Decca during the '30s), as well as newer cuts like "Denmark Blues." In fact, throughout the album, Estes updates many of the old songs with references to cities visited and friends made along the tour route. And while Estes' sinuously grainy voice and furtive guitar strumming perfectly reflect the kaleidoscopic nature of the trip, Hammie Nixon's high-lonesome harmonica makes light of the homesickness the two musicians reportedly felt. A great disc that's best heard after first checking out Estes' classic Decca sides. 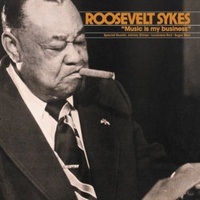 Roosevelt Sykes - Music is My Business