After marrying Swedish aristocrat Monica Silfverskiold in late 1956, Stan Getz spent the remainder of the decade living and working on the Scandinavian Peninsula. Recorded in 1959 with local players including pianist Bengt Hallberg, tenor saxman Erik Nordstrom, baritonist Lars Gullin and trombonist Ake Persson as well as expatriate American trumpeter Benny Bailey, Imported from Europe channels the frosty ambience of its geographic origins to create one of Getz's most evocative efforts -- a decisively modern and cerebral session, it's nevertheless humanized by the warm, rich tone of Getz's tenor sax. While the majority of the music spotlights standards including "They Can't Take That Away from Me" and "Like Someone in Love," it's the two originals -- Lars Gullin's "Stockholm Street" and Bengt Hallberg's concluding "Bengt's Blues" -- that prove most impressive, boasting a style and sophistication that are inextricably tied to their Swedish DNA. 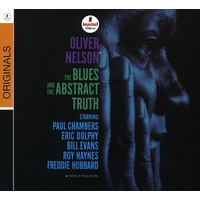 Oliver Nelson - The Blues and the Abstract Truth