2019 CD reissue. Long out of print, this bop date originally issued on the Metrojazz label is not the first date as a leader by Toshiko Akiyoshi, but it is a gem worth acquiring.

The pianist is joined in New York by an all-star group that includes either cornetist Nat Adderley or trumpeter Doc Severinsen, clarinetist/alto saxophonist Rolf Kühn, flutist/tenor saxophonist/baritone saxophonist Bobby Jaspar, guitarist Rene Thomas, bassist John Drew, and drummer Bert Dahlander. There's a feeling of camaraderie as a mixture of head arrangements ("Broadway") and written charts ("Strike Up the Band") of standards, as well as original material by the participants (Jaspar's tasty "Sukiyaki" and the leader's "United Notions"), unfold before the listener. The record begins on a slightly campy note as each musician, following the leader's example, introduces himself in his native language. 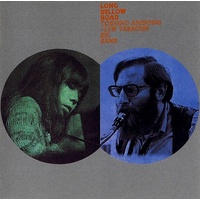