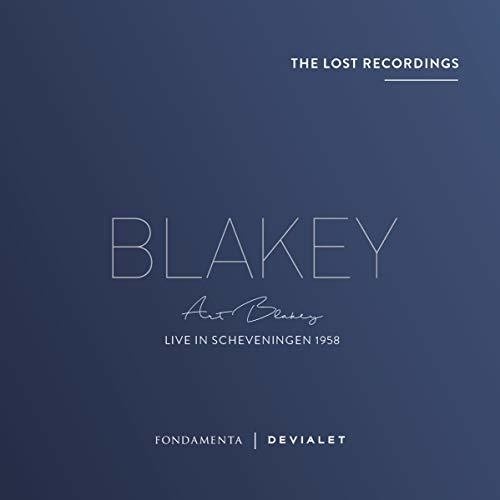 In September 1958, the new formation of the Jazz Messengers led by Art Blakey was introduced and very quickly, the osmosis between the players was obvious.

A month later, on October 30th, they recorded Moanin' with the great sound engineer Rudy Van Gelder – the album became legend. On the next day, they embarked for a month-long European tour. Art Blakey had unknowingly reached the apex of his artistic career....

The tour, with its French and Scandinavian dates, as well as its concerts in Belgium and Luxembourg, was a key moment in the history of the Jazz Messengers. Two dazzling recordings are here to prove it: the Olympia Concert in Paris on November, 22d (Phillips/Universal) and, a few weeks later, on December 21st, Art Blakey and the Jazz Messengers at the Club Saint-Germain (RCA/Sony Music), captured in the overheated – and overexcited – temple of Parisian jazz. The present recording of a November, 29th gig at the Scheveningen Kurhaus is a wonderful new addition to the canon. Its warm, extremely natural recording is further proof of the “state of grace” the quintet had reached by then.

The repertoire mixes a few great bebop classics (Charlie Parker's “Now is the Time”, Dizzy Gillespie's “Night in Tunisia”, Thelonious Monk's “Evidence”) and a handful of original numbers composed by the band's members – although they were new at the time, some were to become absolute hard bop standards (Timmons's “Moanin’”, Golson's “I Remember Clifford” and “Whisper Not”). In all cases, Blakey and his men display, with perfect ease, the broad spectrum of their abilities.