Featuring contributions from a quite formidable cast of trailblazing activists, artists and agitators, including voice of a generation Greta Thunberg, Palestinian shamstep warriors 47Soul, Chilean vocalist and voice of recent protests in Chile, Ana Tijoux, beatboxer and vocal extraordinaire Dub FX, as well as the shrewd UK comedian Stewart Lee, ADF form an unprecedented union of voices unlike any album that has come before. 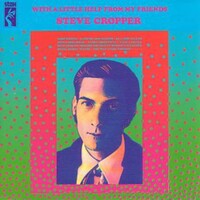 Steve Cropper - With a Little Help From My Friends