“The best thing I caught all weekend,” said critic Peter Margasak of the 2014 New York Winter Jazzfest, “was a superb trio led by drummer Ches Smith with pianist Craig Taborn and violist Mat Maneri, which expertly infused seductively narcotic writing with a mixture of brooding melody and rich texture.” Since that NY debut, the trio has become a priority project for all participants and in June 2015 Smith, Taborn and Maneri recorded The Bell at Avatar Studios with Manfred Eicher as producer. Ches Smith’s first album as a leader for ECM follows appearances for the label with Tim Berne’s Snakeoil and with Robin Williamson.

Ches has worked a very wide range of music in the course of his career, playing with musicians from Terry Riley to Wadada Leo Smith to Marc Ribot and his own groups have been informed by his far-reaching experience. His early biography included studies in composition with Pauline Oliveros and Alvin Curran and his taut writing for the trio on The Bell triggers inspired contributions from Taborn and Maneri, in an album which gradually builds in intensity. “The Bell” is issued on the eve of a major tour with concerts in the US, Canada, Portugal, Austria, Denmark, Sweden, and Norway through January and February. In March the trio heads to South America. 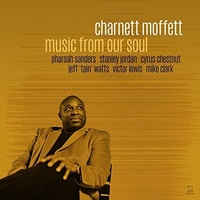 Charnett Moffett - music from our soul